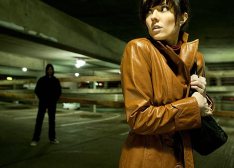 “PEPPER PIKE, Ohio — A Former Pepper Pike police officer faces charges of rape, sexual battery, menacing by stalking and misusing a police database, according to an indictment announced this week.

Jeffrey L. Martin, 55, used the Ohio Law Enforcement Gateway to gather information that allowed him to stalk the rape victim, the indictment said.

He used a firearm during the rape, the indictment said, but it is unclear how.

Martin followed the victim several times, including to the Bedford Police Department when she reported the rape, court records said.

He is also accused of claiming to be a private investigator in an attempt follow the woman onto the Ursuline College campus, records said.

The Pepper Pike Police Department suspended him four times during his tenure, according to his personnel file.

Two of the suspensions involved allegations of inappropriate conduct toward women.

Martin served with the Pepper Pike Police Department between Dec. 12, 1991 and Aug. 20, 2014, when he retired amidst accusations of inappropriate behavior.”

23 Yrs. they managed to keep this guy

What is it that a cop, a stalker and a rapist have in common?

They all want to have control over people

Cops aren’t cops because they want to save civilization

Who you may be dealing with