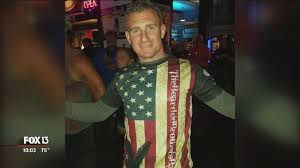 “NEW PORT RICHEY (FOX 13) – A New Port Richey police officer is charged with fleeing and eluding after Hernando County deputies say he sped off at over 100 miles an hour on Cortez Boulevard near Brooksville early Thursday morning.

They say the off-duty officer, 26 year-old Francis Downey, might have escaped had it not been for his riding partner, 20 year-old Tiffany Brush, who wrecked her motorcycle.

“She told the deputy in the emergency room that the person who was riding with her, she was afraid to give his name because he was a New Port Richey police officer,” says Denise Moloney, spokesperson for the Hernando County Sheriff’s Office.”

What a hero, huh?

Girlfriend dumps her bike and he leaves her behind

What a low life

Remember this guy the next time a cop pulls you over

Remember this guy if you ever get called to jury duty

Remember this guy when a cop pulls an attitude on you