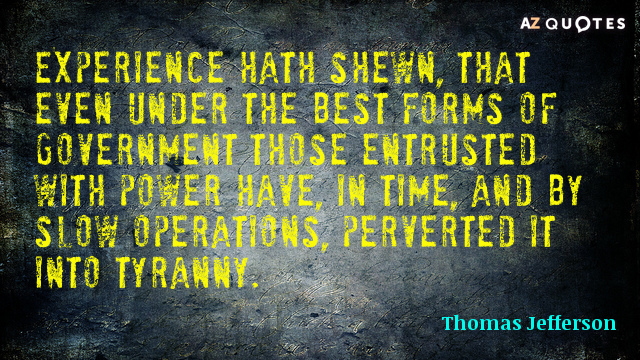 1. Oppressive power exerted by government : The tyranny of a police state

When did it become the normal American state to exist in a state of “Diminished liberty” when in public?

When did our liberty fade so far that we cannot drive down the street or walk down the sidewalk without fear of being pulled over, stopped, frisked or searched?

Whether on land, sand or sea, you, and I, are subject at any time to inspection, search questioning or arrest

At any given time, with the amount of laws and regulations on the books, you are most likely in violation of some law

Even worse, with “Proactive policing” you are subject to questioning and a body search simply because an enforcer of the law believes that you might be suspicious.

The lawmakers that rule us have declared, via the supreme court, that during that search, if the heavily armed, bullet proof vested, arm of the local Government, feels threatened, you may be placed in handcuffs while being detained and questioned

You as a free American, while having committed no crime, are subject to search, detainment and (for the moment) temporary imprisonment

For example, if you are vacationing in Florida and are looking at a boat that has floated onto the beach

Under the proactive policing guidelines issued by the U.S. DOJ, a police officer is obligated to investigate you to make sure that a crime is not being, or about (That’s right…About) to be committed

If that officer feels threatened, even if you are a group of middle aged disabled women in swim wear, you will be handcuffed for their safety

(Note: This is based on a true story)

From that point on your freedom is in his , hers, or their hands

In Florida to resist or oppose an officer is a crime punishable by a year in jail and a $5000.00 fine

Below is the statute

843.02 Resisting officer without violence to his or her person.—Whoever shall resist, obstruct, or oppose any officer as defined in s. 943.10(1), (2), (3), (6), (7), (8), or (9); member of the Florida Commission on Offender Review or any administrative aide or supervisor employed by the commission; county probation officer; parole and probation supervisor; personnel or representative of the Department of Law Enforcement; or other person legally authorized to execute process in the execution of legal process or in the lawful execution of any legal duty, without offering or doing violence to the person of the officer, shall be guilty of a misdemeanor of the first degree, punishable as provided in s. 775.082 or s. 775.083.

And here is the dictionary definition of resistance

1: To withstand, strive against, or oppose
2: To withstand the action or effect of
3: To refrain or abstain from, especially with difficulty or reluctance
But remember this; you are not under arrest, you are simply being questioned about a washed up boat that you are looking at
You could
The charge “resisting arrest” is long gone
Now the charge is “resisting /obstructing”
Simply opposing the officer that is questioning you about a crime that he thinks might be committed (But hasn’t) can end with you being imprisoned for up to a year
So if you are handcuffed, in the Florida sun and in pain because of confinement, be careful not to do anything that could be construed as “Opposing” the officer because “justice is extremely expensive” (1)
Although this is based on a true story that occurred in Florida* , it is not about Florida
It is about the basic human right not to be subject to unreasonable search or seizure
Not the 4th amendment right
That is the right that the Government has granted us
That right comes with limitations that are spelled out by the supreme court
DUI roadblocks, warrant-less cell phone data collection, email interception and many other instances
But the 4th amendment was written into law, not to make it have limitations, but rather to state the basic human right
Once written though, it has given those that rule ample opportunity to make excuses to legally side step it
Can you imagine the men who wrote that thought into a legal document being subjected to it today?
Seriously, The men who stood at Lexington to the withering fire of trained British troops?
The men who authored the Boston Tea party?
Can you picture Samuel Adams or George Washington, pulled from their carriages and handcuffed on the side of the road?
Forced to show their permission from the state to travel and summarily searched?
How have we come so far from freedom and so deeply into the hands of tyranny?
And tyranny it it is
What do you feel when you are driving down the highway and a law enforcer pulls up on your bumper?
Seriously, what?
Fear
Heartbeat
Adrenaline
Fear
And why?
Just a ticket right?
Or maybe not
Maybe more
Why fear?
There is a short and simple answer
Tyranny
The power of the Government is being exerted over you without your consent
Did you vote for a 45MPH speed limit?
Were you represented when it became illegal to tint your windows?
Did you beg “your” lawmakers for drug dogs to search vehicles at routine traffic stops?
For the safety of officers did you consent to being searched and handcuffed?
Tyranny, because any encounter can end with you in prison
Or worse, dead
You are at the hands and mercy of a state backed law enforcer
You hope that he will be lenient
The law right now is up to him
Anything that this law enforcer says in court is given the weight of truth
Because the state is on his side
He is not only the face of the state
But also the income of the sate
If you resisted while in handcuffs
It is because the law enforcer interpreted it that way
And only because the lawmakers that “Represent” you have written laws to make it possible
And you are now going to pay the state thousands of dollars
Fines, court costs, Etc.
All so you can pay for your own loss of freedom
It happens on the local level
The state level
The federal level
It is in its most base form
Tyranny
Resist it at your own risk
* In 2015 a group of disabled women were arrested by Florida Fish and wildlife commission  officers at Honeymoon Island state park in Hillsborough county Florida and detained in handcuffs for hours.  All three were charged with resisting/obstructing for refusing the search of a vehicle that two of them did not own. After filing complaints against FWC, one year later, the arresting officer was changed and the charge was changed. All three were later convicted and one served 30 days in prison.
(1)Leslie M. Sammis, Sammis Law Firm in Tampa, FL

6 thoughts on “Welcome to the American police state”