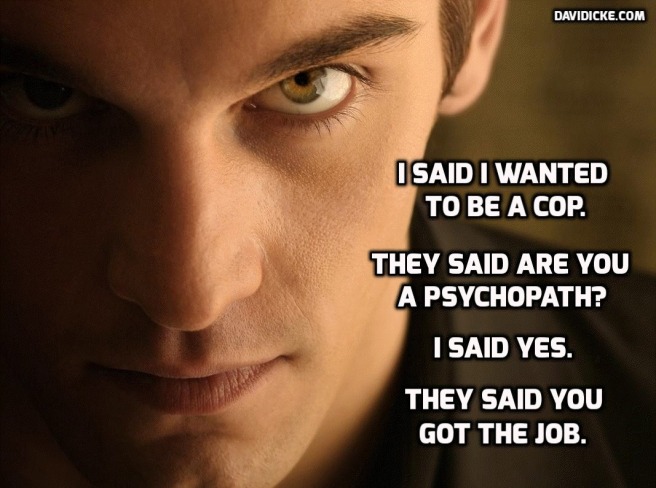 So, who is pulling you over on that dark highway ? Who is that that guy ordering you around with his hand on his gun? Just some guy who decided that  he “Wanted to help people” for a living?     Question : Has a cop ever helped you?  I have had plenty of contact with cops and I can tell you this ; Not once, not ever. I have been interrogated, ticketed, harassed and told multiple times that I am on my own. Every time I have ever called the Cops they have had no resolution for the situation at hand.     So what would we do without these thugs, these most noted members of the thin blue line?  Descend into Anarchy? Probably. I Don’t know about you but I don’t kill or steal because of cops; it’s what keeps me in check.  The Large brown line is more like it.     Stay safe kids and remember that any encounter with LEO can end with the end of your freedom or life.

Ringgold police Officer Blake Ballew, 27, is facing charges out of Catoosa County on allegations he sexually assaulted a woman. Steven Andrew Thornton, 27, was fired from the Cohutta Police Department after what police said was an alcohol-fueled fight with his former stepfather that ended in gunfire.

Ballew was arrested Monday, according to the GBI. The agency opened an investigation Thursday after a woman walked into the Varnell Police Department to file a report against him.

“After interviews, review of the physical evidence, and consulting with the Lookout Mountain District Attorney’s Office, the GBI obtained warrants for the arrest of Officer Ballew,”Joe Montgomery, special agent in charge, said in a news release.

Ballew was arrested on charges of aggravated sexual assault, violation of oath of office and false imprisonment. It is unclear if Ballew was on duty when investigators believe the alleged assault took place.

He was booked into jail in Catoosa County on Monday. According to online jail records, he was released the same day.

Ballew’s employment status was not clear.

Thornton was in between shifts when he was arrested Saturday morning in southern Whitfield County. The GBI determined he was not acting in his official capacity as a police officer, but Cohutta police Chief Greg Fowler decided to fire him anyway.

His employment was terminated hours later, Cohutta Mayor Ron Shinnick said. The city has submitted their reports to the Georgia POST Council, the state agency charged with regulating and certifying police.

According to an incident report obtained by AJC.com, Thornton got into a fight with mother’s ex-husband, Tramell Putnam, after Putnam drove another woman home from a bar. The group had all been drinking together, a witness told Whitfield County sheriff’s deputies.

Thornton confronted Putnam when the man returned home, and he told Thornton to “sleep it off.” A scuffle ensued, and the witness said he saw Thornton put a gun to Putnam’s side before firing a round into the floor.

The former officer claimed his stepfather threatened to kill him and put him in a chokehold. He told deputies he fired the gun as a scare tactic after he began to lose consciousness.

Thornton was arrested on charges of aggravated assault, discharging a firearm while under the influence of alcohol, and possession of a weapon during the commission of a crime. He was being held Monday in the Whitfield County Jail in lieu of $20,000 bond.”

One thought on “We’re the police and we are here to help : Separate Georgia cops arrested for sexual assault and armed assault of one officer’s stepfather”